In October 2017, a flock of biodiversity data enthusiasts descended on Ottawa, Canada for the annual TDWG conference. A year prior, in Costa Rica, there was impromptu lunch session about species interactions, and this year, Antonio M. Saraiva, Jennifer Hammock and Quentin Groom helped organize a symposium "Biological Interaction Data - towards data standardization" (recording, abstracts): six presenters, including myself (slides), shared perspectives on species interaction data. A following workshop invited discussions on how to catalyze the exchange of biotic interaction data. Some tangible outcomes included a solemn promise to meet again, (re)new(ed) personal connections, some meeting notes, a group picture, and a pointer to a copy of the Nordic Saproxylic Database: A comprehensive overview of the biological diversity in dead wood by Stokland et al. 2006. Thanks to Dag Endresen and Dmitry Schigel, an archived copy of the database is now accessible through a Zenodo dataset and can be queries through GloBI. 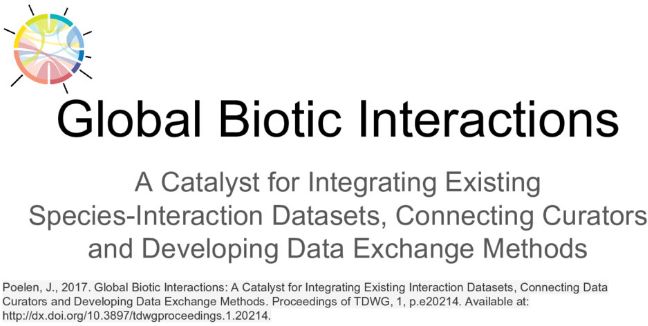 An increased collaboration between individuals, projects and institutions, catalyzes the preservation and proliferation of valuable datasets that describe how organisms interact. Hopefully, efforts like the TDWG Species Interaction Data Group will result in a more integrated approach to incorporating available structured data records into the corpus of biodiversity knowledge. As GloBI continues to monitor and index these valuable records, we can verify that this knowledge is alive and accessible. While GloBI has played a role in continued access to semi-dormant datasets (e.g., SPIRE, Nordic Saproxylic Database), other original data sources like Kelp Forest (also see this issue) and the Ecological Database of World's Insect Pathogens seem to have dropped off the face of the planet. Luckily, Sarah E Miller was able to transcribe and archive the latter before it went offline. However, as far as I know, the Kelp Forest data remains inaccessible and might be lost forever.

Got an interaction dataset you'd like to preserve and/or make searchable?