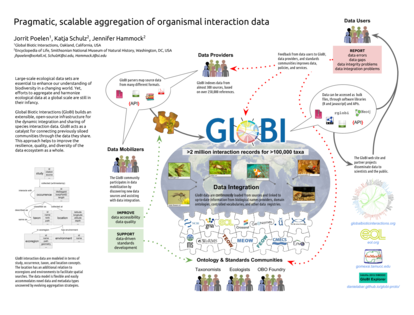 The increased availability of digital records on where organisms hangout (or occur) has been facilitated by Darwin Core, a community standard for exchanging biodiversity information. TDWG (pronounced tahd-wick), the association that helped nurture this standards into maturity, held this year's annual meeting in Costa Rica. While the primary focus of Darwin Core is on species occurrence, an extension mechanism is provided to help capture other kinds of aspects of biodiversity data. While some methods exist to help describe species interactions in DwC (e.g. associatedTaxa, associatedOccurrences), various projects use "unofficial" extensions to express granular species interaction data. GloBI makes an effort to support all of the methods in the hope that, over time, we'll continue to discuss and collaborate on ways to improve ways to share interaction data. 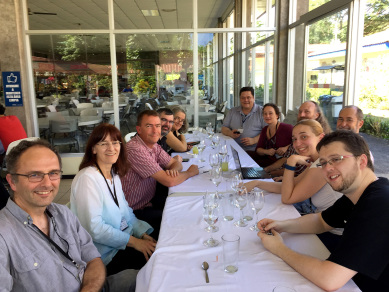 A long time GloBI contributor, Katja Schulz, presented a poster on a pragmatic approach to integrating species interaction data at the conference. Rather than relying on a single data exchange format, GloBI will take any existing (semi-)structured digital format to make existing datasets easier to access. With this approach, the burden of standardization of existing datasets is reduced. In addition, a continuous integration approach is taken: the datasets are continuously refreshed and linked against taxonomies, ontologies and other biodiversity data services.

Also, she, and some of her colleagues, joined for an in-promptu lunch to talk about species interaction data. I hope that the outcome of this lunch will contribute to the ongoing development of ways to easily exchange evidence records on how organisms rely on each other.

added 18 July 2017: Note that TDWG Interest Group on Interaction Data is forming and will be present at TDWG 2017 in Toronto, Canada.