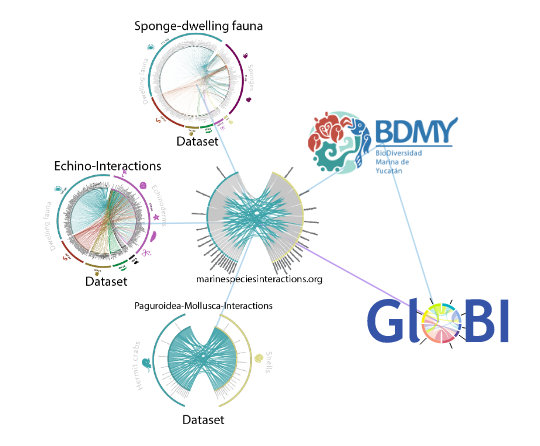 A brief story of a great collaboration

The GloBI and the Yucatan Marine BioDiversity (BDMY, UNAM Faculty of Sciences, https://bdmy.org.mx) project collaboration begins around 2016. At BDMY, we were looking for a way to standardize the data generation on marine invertebrates guest/host interactions. We began to generate a small dataset on associated crustaceans with coral reef sponges in the Gulf of Mexico and the Caribbean Sea. This interest led us to contact the Ph.D. James D. Simons, leader of the Gulf of Mexico Species Interactions (GoMexSI) project. James introduced us to Jorrit H. Poelen, a brilliant software and data engineer who shares a “crazy initiative” that he has: to compile the largest amount of information on species interactions at a global scale in a centralized site, in a standardized way and with public access, which he called “The GloBI.” This initiative makes all the sense to us, and it was perfectly adjusted to our needs. From that moment to the present day, GloBI and the BDMY team’s relationship has grown closer and closer - like a symbiosis! - with a common goal: “Make the species interactions more accessible to all the world.”

At this moment, we have three active data sets incorporated into GloBI:

As a Latin-American working group, another concern is to make the exchange of information on ecological interactions more accessible for Spanish speakers. For this reason, BDMY has collaborated by creating an entirely Spanish tutorial on the GloBI operation and translating part of the GloBI website contents.

How was Marine Species Interactions born?

Derived from all this effort and work, BDMY: Marine Species Interactions arises, thanks to the initiative and commitment of the Ph.D. Nuno Simoes, MSc. Antar Pérez-Botello and D.Sc. Rosa Sotelo. Driven by the lack of consensus and the absence of standardized methodologies in analyzing interactions, the main objectives of Marine Species Interactions are to generate a species-interactions baseline in marine environments and propose tools that contribute to environmental protection and conservation initiatives. 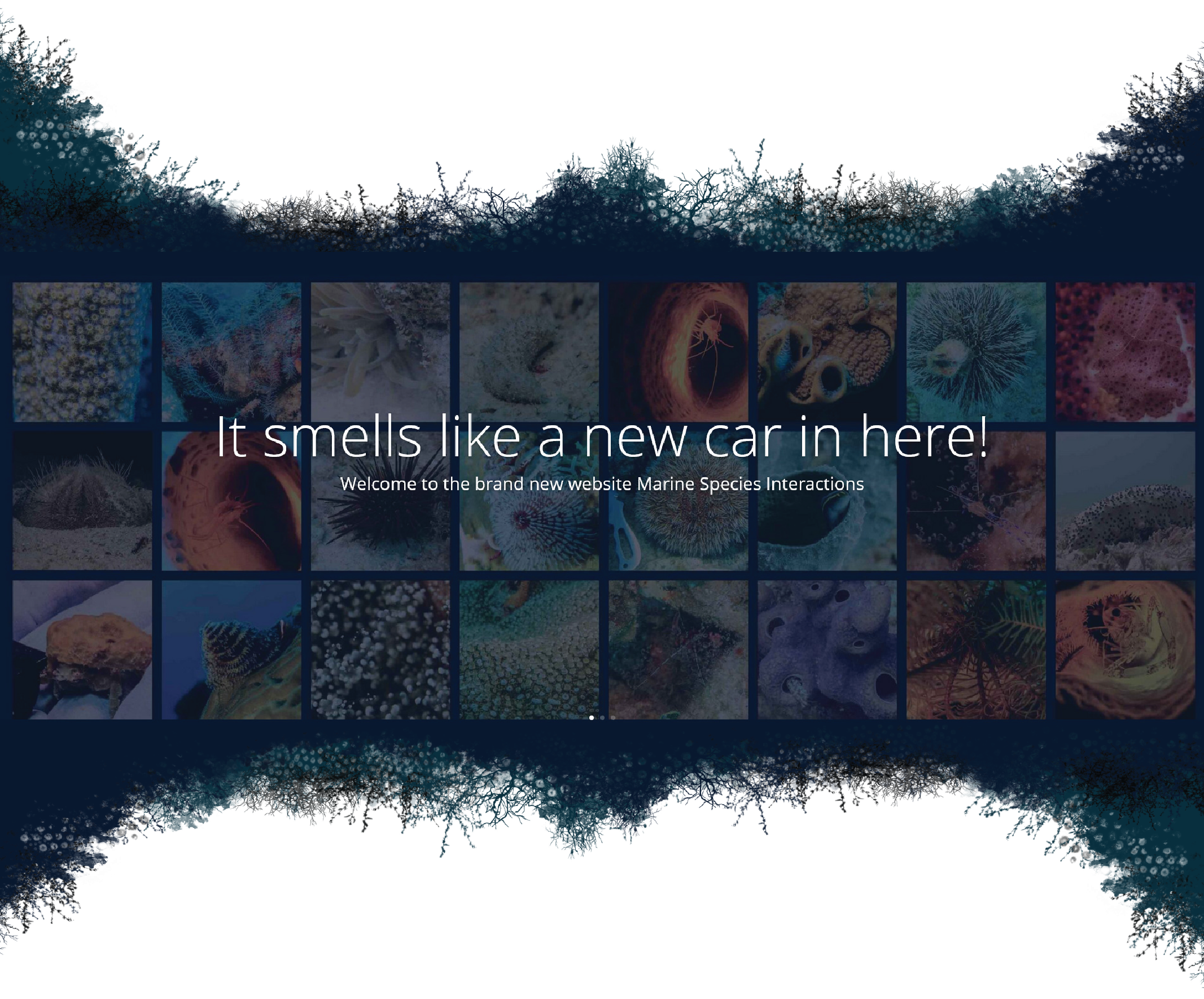 What is Marine Species Interactions?

“Marine Species Interactions” (https://marinespeciesinteractions.org) is a multidisciplinary project that involve ecology and taxonomy of marine invertebrates, data science, digital media, scientific illustration, and science communication, with a common goal, communicate and understand the symbiotic interactions between marine invertebrates importance and their influence on the ecological processes. We are currently concentrating our efforts on studying the Porifera, Echinoidea, Cnidaria, and Anomura phyla at the American Atlantic. Still, we are open to expanding research frontiers to as many geographies and taxa.

Why are symbiotic interactions crucial in the marine environment?

Symbiosis is a recurrent and prolonged phenomenon of two or more species where at least one obtains benefits that facilitate their survival. If we classify the types of symbiosis by the species benefit (+), harm (-), neutrality (0) during the association, we can distinguish three types: parasitism (+, -), commensalism (+, 0), and mutualism (+, +). At first sight, the symbiosis may seem an unusual phenomenon. In reality, its influence extends to all marine ecosystems and is crucial in the marine environment. For example, the majestic animal forest of hard corals is a well-known mutualistic association between an animal -the coral polyp-, and a photosynthetic microalgae.

For their part, sponges and echinoderms can facilitate the species establishment in the order of hundreds of species! Its associated fauna includes parasites and commensals that could not survive without their host (obligate symbionts), to species that, although they obtain a benefit by associating, can also survive on their own (opportunistic symbionts). An exceptional example of this diversity of associations is the Caribbean long-spined hedgehog, Diadema antillarum, which holds an incredible record of more than 30 symbiotic species documented in the scientific literature. The effect of symbiosis is decisive in ocean ecosystems’ ecological and co-evolutionary processes, and its study should become a priority if we want to propose biodiversity conservation and management strategies. 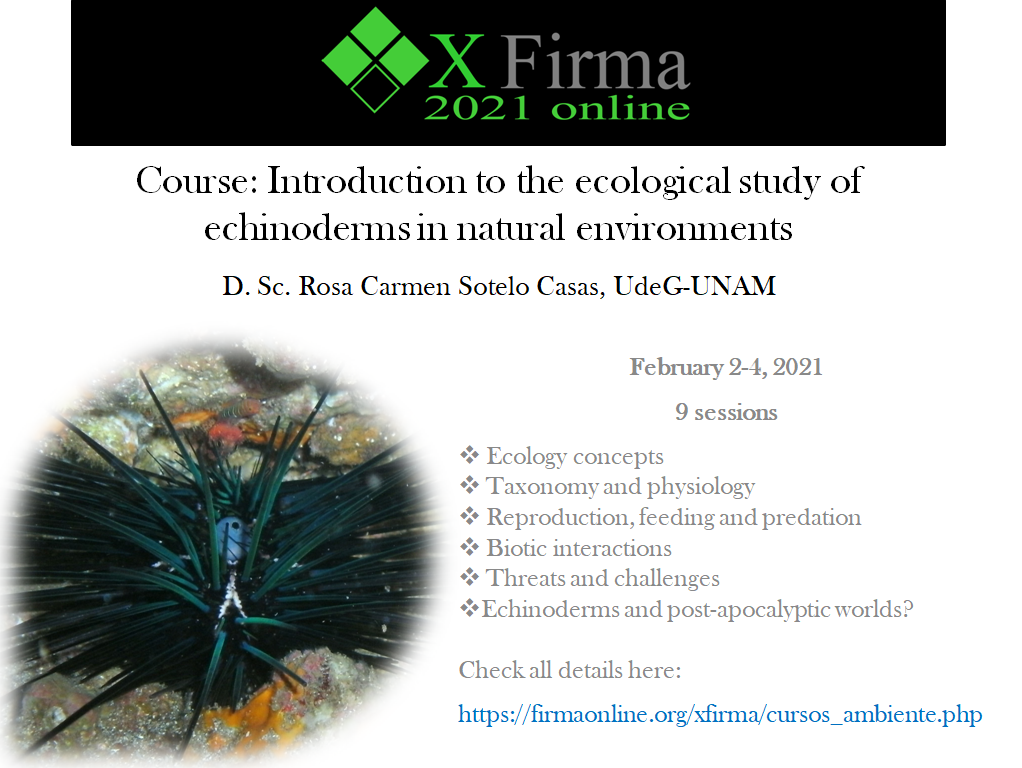 Our working group actively participates in scientific divulgation from all fronts and generates products for the scientific and non-scientific public, such as open-access databases, scientific articles, species infographics, and congresses’ participation. Likewise, we consider it of great importance that the new generations adhere to this type of ecological research line, for which we maintain active participation in teaching work and human capital formation.

We want to take advantage of this space to invite you to our next course, “Introduction to the ecological study of echinoderms in natural environments” (for Spanish-speaking colleagues), by D.Sc. Rosa Sotelo. This course will be part of the X Ibero-American Forum of Marine Resources and Aquaculture (XFIRMA online 2021) from February 2-4 of this year. We will take an exciting journey from the basic notions and ecological paradigms to the physiological particularities. These morphological and behavioral characteristics have made echinoderms an iconic edge of marine environments.

As you can see, BDMY and Marine Species Interactions still have many stories to tell, so we invite you to follow and visit our social medias and websites: