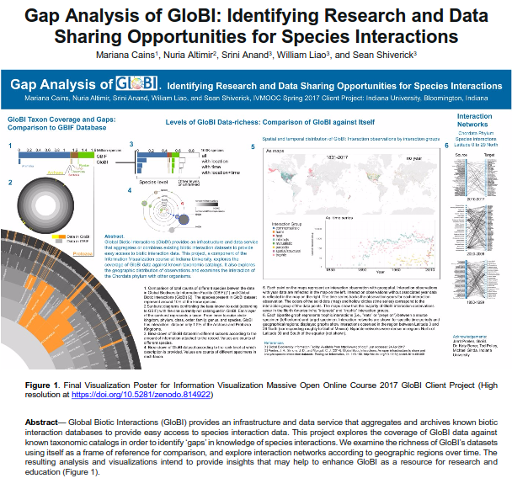 Remember those missed connections sections in local newspapers, or more recently, on craigslist? They contain records describing short lasting species interactions or co-occurrences of humans (Homo sapiens). These records are published in the hope that a short lived interaction turns into a longer lasting symbiotic relationship.

Just as some humans go to great lengths to record missed connections, an ambitious team of students of the 2017 edition of Katy Börner's information visualization course (IVMOOC) took on the task to find missing interactions in Global Biotic Interactions (GloBI). Now, you might wonder, how do you find something that is missing?

Students Mariana Cains, Nuria Altimir, Srini Anand, William Liao and Sean Shiverick combined their cross-disciplinary skills to visualize the missed connections in GloBI. In this case, missed connections include records of interactions between species that are incomplete, or not yet openly available in (semi-)structured digital datasets through GloBI. In only a few months, Cains et al. managed to come up with various ways to visualize the spatio-temporal and taxonomic completeness of interaction records. They shared their results in an open access and (as of yet) unpublished paper "Gap Analysis of GloBI: Identifying Research and Data Sharing Opportunities for Species Interactions." (Cains et al. 2017)

The gap analysis confirms that the Eltonian shortfall (Hortal et. al 2015 (pay-walled)) still exists for species interaction records in geospatial, temporal and taxonomic dimensions. For instance, the maps and temporal graphs included in the paper clearly show that continents like Africa and Asia are unrepresented compared to North America and Europe. Also, the results suggest that only about 10% of the Global Biodiversity Information Facility (GBIF) backbone taxonomy have one or more records available in GloBI. Two examples of sunburst diagrams produced by the team showed a visual way to summarize taxonomic completeness for Archaea and Protozoa. In addition, visual aids were presented to help understand the richness of available interaction records. 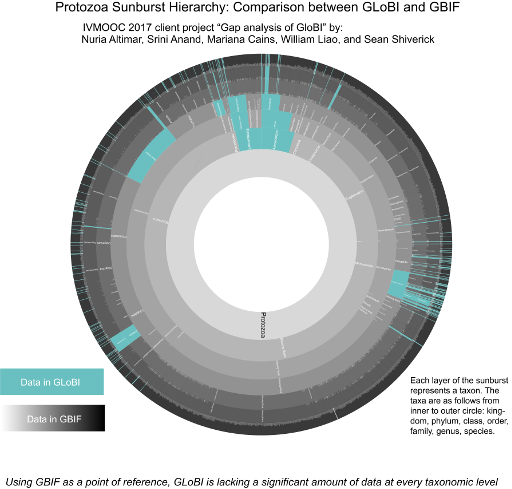 The work also suggests that more work is needed to help integrate datasets across the various open data platforms. For instance, if a more intuitive integration between GBIF and GloBI had existed, Cains et al. could have spent more time on analyzing the data rather than setting up a separate infrastructure to host an integrated dataset. The authors indicated that related technical capacity constraints limited the outcome of their work. I can imagine that most researchers and educators would also hit these constraints in analyzing, or otherwise using, integrated interaction data.

Coming back to the missed (ecological) connections - now that Cains et al. have shown exactly which species are missing, we can start putting out ads like: "Looking for organisms eaten by sea pickles (Pyrosoma) - last seen of the Oregon Pacific coast US in June 2017. Hoping to figure out what caused this mysterious bloom of sea pickles off the Pacific coast." Or find some other way to fill in the gaps and reduce the Eltonian shortfall. Please do holler if you have any ideas.

I want to thank Mariana, Nuria, Srini, William and Sean for an inspiring collaboration and sharing their findings in Zenodo, an open access and open data platform. Also, thanks to Katy Börner, Michael Ginda and team for putting together IVMOOC 2017 and inviting GloBI to participate.