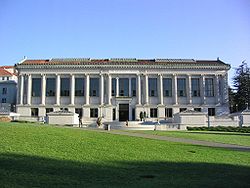 On Feb 5, 2015, Global Biotic Interactions (GloBI) was topic of an afternoon Tea talk at Berkeley Institute for Data Science (BIDS). Located in the historic Doe Memorial Library, BIDS helps to advance data-intensive science across the UC Berkeley campus. Part of their many activities is a twice-a-week afternoon tea series where projects are presented and discussed.

After a short introduction by BIDS fellow Falk Schuetzenmeister, I introduced GloBI to the 20-30 audience members. Following, the more interesting part of the afternoon started: an open discussion! I learned a few things from the discussion. First is that the audience considered the immediate utility of GloBI to be facilitating data discovery and literature research to help come up with original research questions. In line with this topic, Iryna Dronova suggested to create a real-time data source tracker to help visualize which data sources are available through GloBI.

One of the other discussion topics was how to stimulate ecologist to share data. David Ackerly mentioned that a critical part of the success of GenBank was that editorial boards of genomics journal collaborated and mandated that data be deposited in this public resource prior to accepting manuscripts for publication. Also, in-person, multi-day workshops were mentioned as promising method to get cross-disciplinary researchers together, share data and use new tools to help answer meaningful research questions. 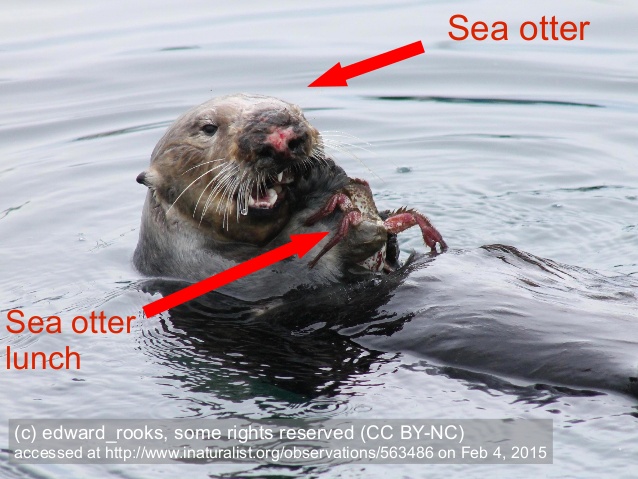 Sea otters and their lunch were a topic of discussion at BIDS Tea Feb 5, 2015 following a presentation.

Finally, an audience member asked a question: 'Do otters really eat beavers?'. This told me that my short demo using available GloBI tools assisted in data review - dubious data was identified quickly during a short data excursion in the world of species interactions. My answer to this question was: Please lookup the source reference and ask the data contributors. After a visit to the EOL Enhydra data tab, I discovered that this interaction was recorded by Joel Sachs et al. (2006).

Now the question remains: Do sea otters (Enhydra) really eat American beavers (Castor canadensis)? Are sea otters that vicious? I hope we'll find out... I'll make a point to share this blog post with the authors, in the hope that they can shed some light on the topic.

Many thanks to Falk Schuetzenmeister, Ali Ferguson and the engaged audience for a stimulating afternoon at BIDS.

Update Feb 19, 2015 - After an open discussion with data contributors, the trophic interaction between Sea Otters (Enhydra) and American beavers (Castor canadensis) has been removed. The changes will propagate into GloBI and EOL with some delay.