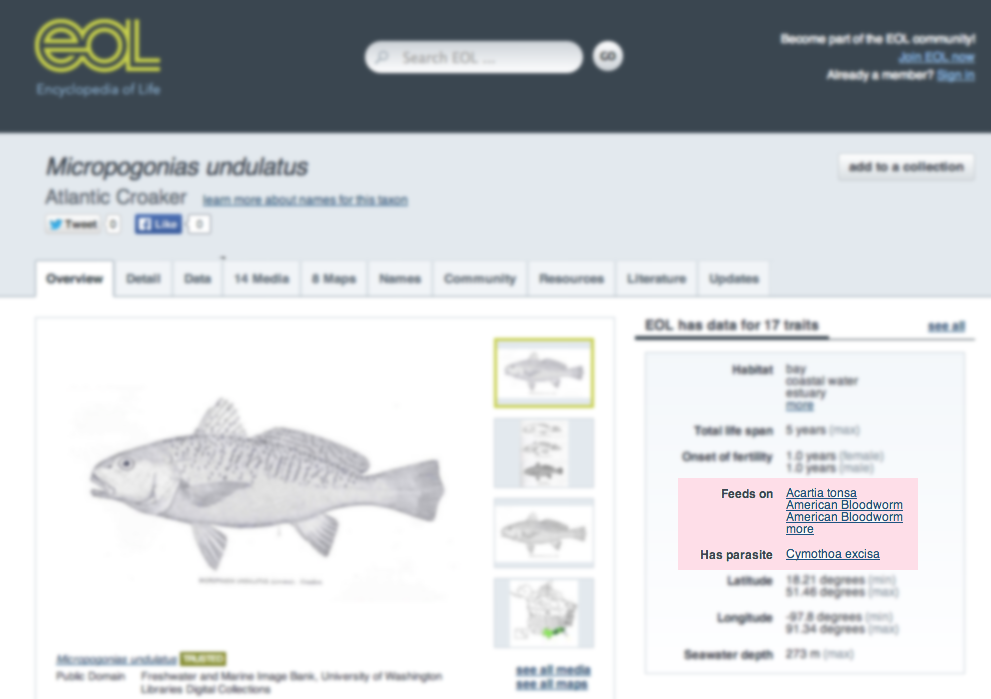 In the spring of 2013, a friend of mine pointed me to an article in the National Geographic about tongue-eating fish parasites. After suppressing my gag reflex upon seeing a picture of a parasite acting as a tongue of an Atlantic croaker (yes, the fish was still alive), I decided to request data from Colt W. Cook, author of a master's thesis titled "The Early Life History and Reproductive Biology of Cymothoa excisa, a Marine Isopod Parasitizing Atlantic Croaker, (Micropogonias undulatus), along the Texas Coast." Colt was kind enough to give me permission to add his dataset to GloBI.

Now that the Encyclopedia of Life has integrated GloBI data into its species pages, the Atlantic croaker page includes dietary habits as well as information about parasites such as Cymothoa excisa. It's a win-win: users of the Encyclopedia of Life gain access to all sorts of structured species-interaction data, and the hardworking scientists who collected the data are attributed for their research.

Screenshot of the reference to Colt W. Cook's thesis on the EOL Atlantic croaker data page.

At time of writing (January 24, 2014), GloBI includes about half a million global interactions with close to four hundred references, spanning over a century of species-interactions data. As GloBI continues to aggregate existing datasets, we lower the barrier to accessing important data and put the scientists who've made contributions to the field of biology in the spotlight.

Acknowledgments: big thanks to Colt W. Cook for sharing his data, and Jen Hammock and Patrick Leary for helping to integrate GloBI's aggregated Darwin Core Archive into the Encyclopedia of Life.